On Saturday 21st March, we launched a weather balloon from Hull. The launch went well and we were pleased so many families came to watch – thanks so much to everyone who helped us to launch it successfully!

After the launch we drove off in the predicted landing direction, which was meant to be somewhere near Northampton. As we headed there we weren’t getting any response back from the GPS tracker and so we gave up hope of being able to find it. The next day, we had a phone call from a man who had found it in a field, almost buried by a hedge! The box with the cameras in had somehow become detached from the parachute. It must have hit the ground really hard and broken the tracker. We were incredibly lucky that it was found, and that they called us. Luckily the camera was completely fine, and has some amazing footage on it!

We’ve put the video on youtube – have a look here: https://www.youtube.com/v/yiqEwZuIUWs&VQ=HD1080

Here’s a couple of stills we’ve taken from the video, you can really see near space.

And here’s a picture of Heather and Roger, who found the box for us. 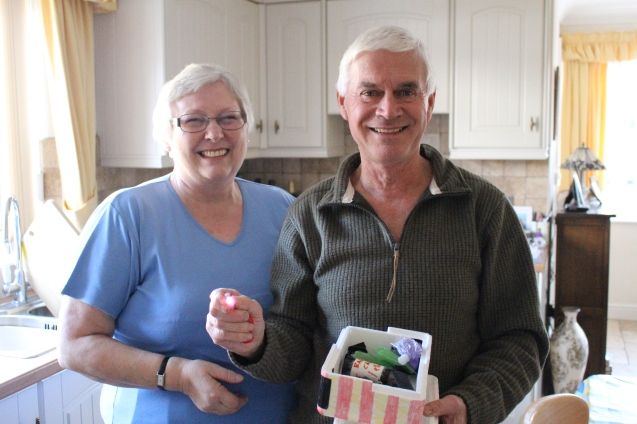 Our next launch will be in Bristol, on Saturday 18th April. Maybe we’ll get even higher…